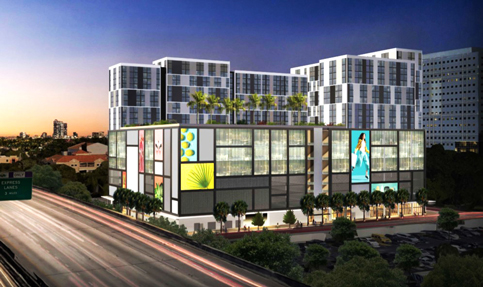 Retail giant Target has signed a letter of intent to open a store inside a planned mixed-use retail and residential development in Overtown called Block 55, according to the developer of the expansive project.

The developer, in concert with the board of directors of the Southeast Overtown/Park West Community Redevelopment Agency (CRA), plans to construct the project at eight and 12 stories, on land at 249 NW Sixth St.

The project was considered recently by the city’s Urban Development Review Board, and nearly stalled by a 3 to 3 vote on a motion to deny. An assistant city attorney said a tie vote would result in the matter being automatically continued for at least a month, unless reconsidered.

After further debate and consideration, the board agreed to reconsider. Then the board voted unanimously to recommend approval of the project, with several conditions.

The developer and CRA officials were grateful for the move forward, noting that any delay would seriously impact progress on the long-awaited project.

The vacant site is about a block from both the Virgin MiamiCentral train station and the historic Lyric Theatre.

The developer is identified as the Swerdlow Group, and Downtown Retail Associates LLC filed the ambitious site plan. The project represents the selected redevelopment option for the CRA’s 2017 request for proposals, with the goal of affordable housing in the urban core and reactivating the neighborhood. A portion of the residential units will be available to low-income and extremely low-income tenants.

“Target will anchor the ground floor with a full service Starbucks and CVS pharmacy within its space,” says the website. “Additional co-tenants will include a health club, a grocer, multiple apparel concepts and hard goods as well. The first floor will also feature restaurants with outdoor seating along Sawyer’s Walk, a block long dedicated park on the north side of the project.”

Aldi has also signed an agreement to open a grocery in the project.

Documents filed with the city show a plan to price 154 of the apartments as affordable and 402 at market rate.
The board considered a Feb. 19 staff report on the project prepared by Elia Sorice, a Planner II in the Planning Department.

Downtown Retail Associates LLC, represented by attorney Jeffrey Bercow, has been working with city planning staff for the proposed Block 55 development, she wrote.

“The project represents the selected redevelopment option for the CRA’s 2017 request for proposal, providing much needed neighborhood-serving retail, employment opportunities, and 154 Affordable Dwelling Units in the Overtown neighborhood,” the letter reads.

Ms. Sorice noted the applicant has made progress in addressing planning staff matters related to the proposed façade and streetscape design, but the following concerns remain for the board’s consideration:

■Lifestyle images – Portions of the podium are reserved for lifestyle images which are described to be “integral to the project’s façade treatment and artistic design.” Planning staff requests additional criteria for the final images including intended content, and the review and approval process for proposed images now and in the future.

■Streetscape design – Northwest Third Avenue has been designed as the back of house, with service, loading, and parking access from this frontage. Additional design details are required for pedestrian islands and curb extensions to ensure continuity in the pedestrian experience.

■Activation – Northwest Third Avenue frontage is designed without habitable space at the ground level, which is not consistent with façade activation and transparency requirements of Miami 21 zoning code. Refinement of the ground level program and incorporation of additional fenestration at eye level is required to minimize blank walls and promote pedestrian interaction along all frontages.

■Art display – Provide adequate habitable space within the art display at the northwest corner of the building. This increases the viability of the liner space fronting Sawyer’s Walk, establishes habitable space along Northwest Third Avenue, and reduces overall width of the curb cuts.

The final vote recommending approval included several conditions, including: the developer break up the massing of the upper residential components of the project; better activate Sixth and Seventh streets; formalize the artwork on Northwest Third Avenue and consider hiring a local artist as a way to beautify the area with a mosaic; and more.

The project is designed by Arquitectonica.

The developer is requesting several waivers, including: Permission to reduce the setback above the eighth story; and reduce parking requirements by up to 30% due to the site’s close proximity to public transit.

The project is to include ground floor space for one of the city’s Neighborhood Enhancement Team (NET) offices.

Mr. Bercow told the board the inclusion of large-scale retailers is integral to the design.

This will include goods and services not currently available in this area, at affordable price points.

“As a true mixed-use project, we believe it will revitalize the area, bringing retail shopping opportunities to Overtown,” he said.

Planned improvements to Sawyer’s Walk will encourage walkability in the neighborhood.

The overall project is expected to result in about 1,100 permanent jobs, Mr. Bercow said.